The Historic Trilogy: The Statue of Liberty, Ellis Island and The CRRNJ Terminal

The Statue of Liberty

Ellis Island, off the New Jersey shoreline in upper New York Bay and in the shadow of the Statue of Liberty, was the principal federal immigration station in the United States after its opening in 1892. The original building, destroyed by fire in 1897 pro cessed some 15,000,000 immigrants. A new inspection station was opened on the island in 1900 with the completion of the massive French Renaissance style main building. During the next half century the original 3 acre island was enlarged several times with landfill to encompass 27.5 acres. Additional structures, including a general and contagious disease hospital, were built to provide facilities for the administration of immigration laws in processing incoming aliens.

Immigration declined sharply with the passage of the immigration restriction laws in the early 1920's. Thereafter, only those immigrants whose status in this country was questioned, whose papers were not in order, or who required medical treatment were se nt to Ellis Island. The facilities were increasingly used as a detention center for those who entered the United States illegally or violated the terms of their admittance.

The Ellis Island Immigration Museum tells the inspiring story of the largest human migration in modem history and is a memorial to the immigrant experience.

Ellis and Liberty Islands share this important era in American history with the CRRNJ Terminal. Millions of immigrants, having been greeted by the Statue and processed at Ellis Island, traveled to their new homes via trains from the CRRNJ Terminal. 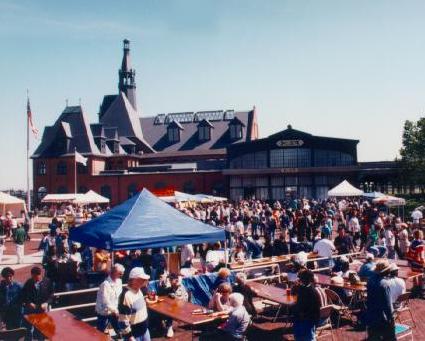 The Terminal On A Beautiful Summer Day

The Liberty State Park area has always been historically significant as a major point of egress. Whether simply crossing the bay or heading for the open ocean, several different societies during the past centuries have utilized the Communipaw Cove area.

By the mid 1800's, growing populations and the demand for transporting goods and supplies necessitated a means of transport that was fast and dependable. Railroads would supply the solution to the increasing transportation demands.

In 1864, the CRRNJ bought extensive acreage in Jersey City, and opened its first terminal. By the mid 1880's, the need for a larger terminal became evident. The present complex, constructed in 1889, represented the greatest concentration of rail facilitie s in the Now York Harbor area at the turn of the century.

Ellis Island increased traffic in the terminal by several thousand immigrants each day. Approximately eight million immigrants traveled to their new homes via the Central Railroad.

From 1890 - 1915 the combination of commuters, immigrants and freight brought between 30,000 - 50,000 people and almost 300 trains each day to the CRRNJ Terminal. The railroad became a way of life for most of the surrounding community.

Within twenty years, however, railroad travel and traffic decreased. The decline of immigration and the Great Depression severely hurt the rail industry. In 1967 the CRRNJ discontinued commuter operations. The Terminal and adjacent waterfront were purchas ed through Federal, State and local funding. A major cleanup effort was begun and Liberty State Park opened on June 14 , 1976. Today the park is the focus of many community and statewide special events.

The CRRNJ Terminal stands with the Statue of Liberty and Ellis Island marking an important era in American history.

The Hudson River Is Jersey City's Arena For Water Sports!